As a dog owner, you’ve likely considered leaving the radio on for your dog while you’re out of the house. They even sell CD’s made specifically for your pup’s ears, claiming that they’re made to help with anxiety and have a calming affect. But do dogs really like music? And if so, what kind do they really enjoy? In this post, we’re going to find out – what kind of music do dogs really like?

You’ve probably seen a number of YouTube videos showing dogs dancing or howling along with their owner’s favorite tunes, but do they actually like what they hear? The answer isn’t as cut and dried as you might think. Dogs hear at a much higher frequency than humans do, thus perceiving music in a different way. Certain notes are not as easily heard by dogs, so something like the melody of a song may not even make a difference when they’re listening.

Instead, things like the tempo of a song are what really make a difference to our canine companions. It’s actually been discovered that tempos that are closer to a dog’s heart rate tend to have a more calming effect, whereas frenetic tempos can be more stimulating to their senses. Average hear rate tends to vary by the size of dog, so take that into consideration when choosing some tunes for your pup to enjoy. In general, it’s been found that long drawn out notes are more relaxing to a dogs ears, while shorter repetitive notes have the opposite effect.

So, what kind of music will your dog actually enjoy? The answer is – it depends. Individual dogs will like different kinds of music based on how their ears perceive tone and tempo, but there have been studies about how different genres effect dogs as a whole. When exposed to a genre like heavy metal dogs would bark and display signs of agitation, but when subjected to pop music, there was no visible reaction or effect on demeanor. In fact, the only genre that seemed to have a calming effect was classical music, and study done by the Scottish SPCA showed that stress levels of dogs were significantly decreased when listening to the music versus sitting in silence.

Playing this kind of calming music for dogs is helpful in a lot of ways. You can play it when you’re at work and your dog is home alone to help with separation anxiety. Some boarding facilities and shelters even play the music in their kennels to help calm their dog’s nerves. It’s also worth noting that playing calming music can help a dog recover from illness or injury, since it can help lower heart rate and keep the dog relaxed.

If you’re putting on music for your pup when you’re not home, make sure you’re paying attention to the volume. Dog’s have much more sensitive hearing than us humans, so cranking the music up too loud may have cause your dog to become even more stressed out an anxious.

Have you tried playing music for your dogs? How have they responded? Let us know in the comments!

3 Treat Recipes Your Dog Will Love 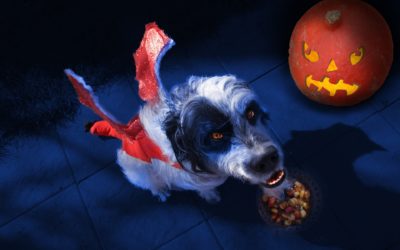 Tips on How to Plan a Halloween Dog Party How to Keep Your Dog Safe Around Wildlife